PRESIDENT TRUMP: Everything having to do with Russia… Really what he said last night when he said, “They may go in, they will go in,” and he talks about a “minor excursion,” and I sort of said, “I don’t believe he said that ’cause that’s like giving them…” You know, they use the term “green light.” He was green-lighted. And, you know, it’s very interesting because the president of Ukraine last night, he was… (chuckles) He was seen in some very unusual pictures. He couldn’t believe what he heard. He couldn’t believe what he heard, and I couldn’t believe what… Whether you’re for strong stoppage or not, you’re really telling him, “You might as well go in.”

BUCK: Cleanup on aisle Biden! Welcome back to the Clay and Buck show, freedom’s tag-team. Clay’s in Florida and I’m in quarantine for my last day here and I just gotta say Clay, you know, ’cause you were traveling yesterday when some of this was breaking. They initially tried to do the, “Biden had a good press conference” thing; “he was great!” There were some people and particularly the fake Republicans — in the media I’m talking about, now — who only exist for their left-wing paymasters’ amusement.

So they say things like, “Joe Biden’s great, and I’m a Republican,” and no one actually believes them or listens to them. But it didn’t last very long because the president, Zelensky, of Ukraine was fuming publicly over Joe Biden saying, “limited incursion, no big deal,” basically. (laughing) Everyone’s like, “Uh, no. When the Russian military does an incursion or an invasion into another country, that is a big deal,” Clay. They wanted to say it was a good press conference. They’ve spent the last 48 hours trying to make sure that Joe Biden doesn’t walk us into an expanding hot war in Eurasia.

CLAY: This is an embarrassment, Buck, because you and I do three hours of daily radio, 15 hours a week. And I bet in front of you there’s, like, a couple of notes that you’ve jotted down, and the same thing is true for me. They prepped Joe Biden for four days, Buck, on how to respond to the questions that I was gonna get. They knew, basically, what questions he was going to get, because they give the order for him to call on all of the media, and so he was prepped.

He looks down at his little list and says whoever they are and whatever their affiliation is. H eknew exactly what he was gonna be asked, managed to completely bungle whether the 2022 elections are gonna be free and safe and reliable. He otally destroyed the situation in Ukraine — and oftentimes, if you watch some of the viral clips, his brain was clearly meandering. It was as if he was unable to focus exactly. It was so bad, Buck, that they even had to trot out Jen Psaki and put her on Fox News to try to clean up what had happened, which almost never happens.

BUCK: Into the lion’s den. Look at that.

CLAY: That’s a sign of how bad it was, Buck. I don’t remember the last time I saw Jen Psaki doing Fox. I’m not talking about a briefing. I’m talking about doing a direct, in-the-middle-of-the-week interview with Fox News. That’s how destructive this press conference was that they had to get her to clean things up. 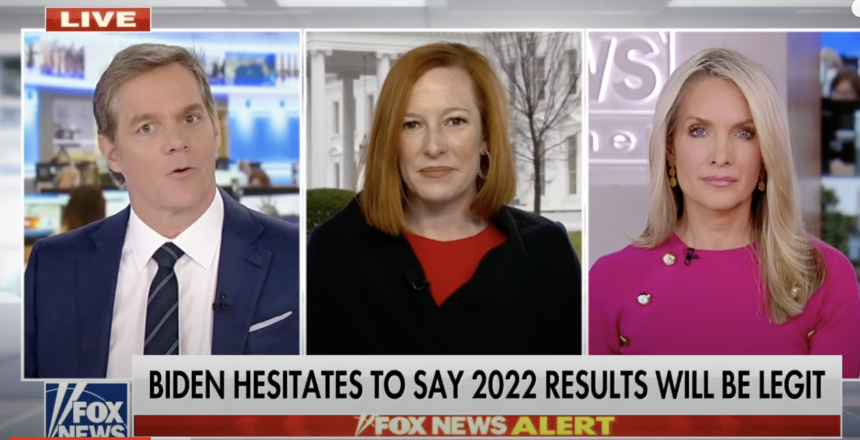 BUCK: Isn’t it amazing that that’s a rarity?

BUCK: I can’t really let this go that the world we live in now is one in which the crazy commies never have to actually defend their ideas outside of their echo chambers, ’cause we always say, we’d love to get ’em to come hanging out here.

This story originally appeared in Clay Travis and Buck Sexton