TODD: Just this week onMonday on EIB's High Note, we told the story and heard from a gentleman named Rodney Stotts who, at one point in life, had been a drug dealer, and is now someone who helps redeem young lives, employing raptors, falcons. And Rodney joins us now from Charlotte Court House -- oh, I know that -- Virginia. Rodney Stotts joins us. Rodney, welcome to Rush's program. I'm so glad you could join us.

RODNEY: Yeah, thank you for having me. I truly appreciate it.

TODD: It's neat to talk about redemption in these days and a man who is helping youngsters. Now, I just wanted to ask this question. I work with some people who are recently incarcerated, and I've noticed something about people who had been successful drug dealers is they have really, like, sharp skills/sharp minds that can be transferred into daily life in a successful way. Is that an observation only of my making or have you seen the same thing with people who have used their great intelligence to deal drugs and then can go do things that are, you know, more helpful for society?

RODNEY: Well, a lot of times what people don't understand is, the person that's dealing drugs wasn't stupid. They was hungry. They needed a roof over their head. They needed clothes, not holey shoes. They needed to eat. 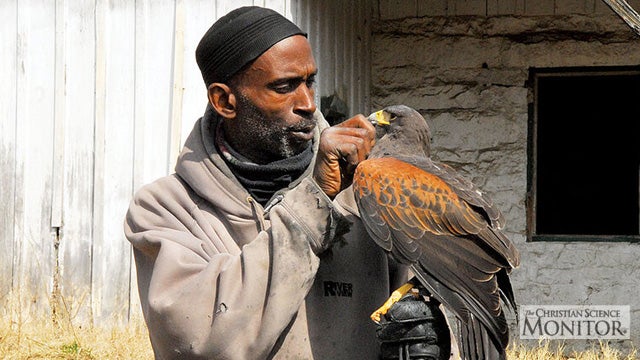 RODNEY: So it wasn't that they were dumb. It was the fact that they just had to use what they knew to make money at that time, got locked up, and now that they realize that that lifestyle isn't what they want, that sharp mind was always there and they just employ it to something else now.

TODD: Yeah. And for you, tell the story about meeting these raptors, these falcons. I can't imagine it ever occurred to you, Rodney, that one day you would be a falconer. But can you talk about that first time that you saw these beautiful birds and what that meant to you?

RODNEY: I was taken somewhere else. You couldn't imagine the beautiful sight. You're standing here amongst all this garbage and trash and all you see is paradise. I couldn't see anything except for beauty. I just was lost.

TODD: I think that the Lord sometimes plants in us love for certain people but also, I think, certain species. I think there are people who are calmed by the presence of dogs and cats. I eat meat so I'm not gonna sit here and be a hypocrite or something but in my backyard when I see a deer I love to look at them and sort of commune in that way. I know that makes me sound very hippish and that's fine. But, Rodney, when you held these raptors, then, there was an opportunity for you to actually become a falconer, and what did that mean to you and who introduced that opportunity to you?

RODNEY: Well, actually what happened was the program I was working with, we only work with adjudicated youth, right?

RODNEY: It's young kids that have dropped out of school and things of that nature. So I started a program called Rodney's Raptors because I felt it was ridiculous to have someone locked up or drop out of school in order for them to experience something and go on and share something else. So when I became a falconer, I associated the birds just like with young people. If someone didn't step in and help these raptors -- because 80, 90% won't make it through the first winter, then the same way with the young people.

If you don't step in and help, a lot of them will end up with records and everything that carries with them for the rest of their life. So 30 years from now, that same mistake that they made 30 years ago will haunt them forever. So my thing was to try to stop that from happening, give 'em something else to do, and those same young people would then turn around and help someone else.

TODD: I love the joining of something larger than yourself and gaining it is self-esteem, realizing, "I can help another, I can help a raptor, and then I can teach other people to be raptors." Did I hear you say that the system did not want you...? They only wanted you to work with adjudicated youth, people who are in the system; they didn't want you to use your skills and these great birds to prevent kids from getting into the system?

RODNEY: No, what had happened was the program that we work with, when young kids would come in that were still in school, that were doing good, they couldn't be employed with us because the program was for adjudicated youth. And if you had to do a 1700-hour program with us, you couldn't be in school.

So that means we only work with kids that dropped off school, that were longed up, that were court appointed and things of that nature. So anyone that wasn't, you couldn't do anything. So that's one of the reasons why these raptors were started, and now Dippy's Dream, named off my mom. So I'm building a sanctuary here in Virginia so that young people, anyone will have a place to heal, to come out and just reconnect with nature.

TODD: What would your mom think, seeing the sanctuary that you're building, Rodney Stotts? What would she think? What'd she think of your new life as a falconer and helping these young people and how'd shelf and watching that change in you?

RODNEY: Well, I'll tell you this. I tell everyone. My mom was always proud of me.

TODD: When you, Rodney... We got about two minutes left with Rodney Stotts of Rodney's Raptors. When you see young kids who have come up the tough way and they hold these birds, do you ever get that feeling that, "Man, I'm inside your head; I feel what you're feeling"? Do you see them have that same appreciation and this realization that this beautiful, strong animal can't survive without you helping them? Do you watch that in their eyes?

RODNEY: Yes. I tell people, I have the guys that you will consider the worst of society, no one wants. You put... They say, "I'll kill this; I'll do this." You put a bird on their hand. "Oh, my God!"

RODNEY: I got... Oh, my God," and they're just going... I tell them, "You see that feeling you have right now?" "Yeah." "Tell me that didn't feel better than the feeling you had 10 seconds ago." "Yeah." "Let's hold on to that feeling right there," and then I got you and we just keep going from there.

TODD: I love it. I love it. How do Rush's listeners reach out to help Rodney's Raptors?

RODNEY: You can go to my website, RodneysRaptors.webs.com. I'm on PayPal, Instagram, Facebook, everything. I'm just out here trying to make sure that people have something else to do without get in trouble.

TODD: Never... In all the days I've worked with people and all the days I've seen people who's been harmed or traumatized or faced these tough times, I've never met one of them yet who didn't appreciate a hand, even if it's an attempt to help. Rodney, God bless you for your journey --

TODD: -- and it's so wonderful that you get to honor your mom in this way. Thank you so much for joining us today, Rodney.

RODNEY: Thank you. That you guys for having me. I truly appreciate it.

TODD: And, folks, listen. This is something that we need to be behind. All of us have needed redemption at some point or another, and incarceration does some things, right? Sometimes it's necessary, and so is the ability to reenter society, if we ever hope to have a truly civil society.

About The Rush Limbaugh Show